To get your obligation-free moving quote with a guaranteed fixed price for your NYC to Philly move, please fill out the form below: 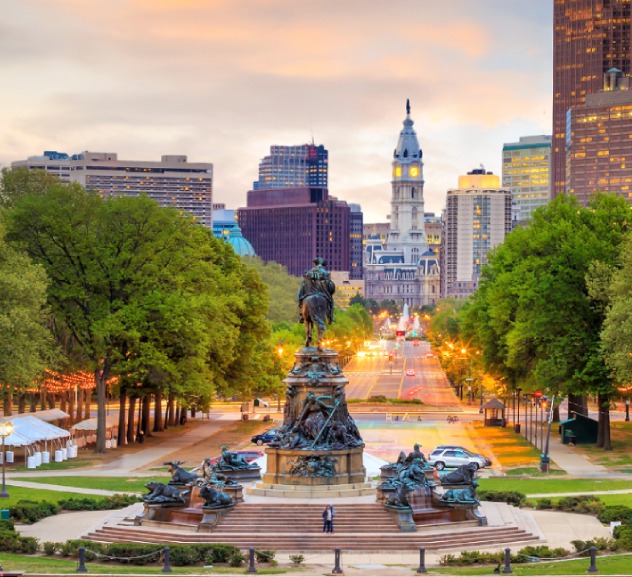 A nicer way to move from NYC to Philadelphia, PA

With 56.84% lower population density than the city that never sleeps, you’ll finally be able to get some rest in Philadelphia. Even though it’s a big city, Philadelphia still has the sense of those small charming towns, so much so it also goes by the name, “City of Brotherly Love”. And if you like living in a close, supportive community, this is the perfect place for you.

All that’s left is to get you there and that is where we, as highly experienced NYC to Philadelphia movers, come in!

At Roadway Moving we have perfected the art of taking the pain out of the moving day while bringing back joy to our customers.

Besides our 5 star rated moving service, we offer additional services to make your move a great experience.

In case you need professional packing, short or long term storage, moving supplies or even a white glove moving service, we’ve got you covered!

Moving you from NY to any location in Philadelphia, without subcontractors

#1 reason why people experience issues when moving long distance is that their moving company outsources the delivery to other transportation companies and therefore loses control over the stuff.

In a situation like that the moving company can’t know where the stuff is and when exactly it will be delivered.

That is why at Roadway Moving we have our own trailers and we do not outsource delivery to others.

We can move you directly from NY to any part of Philadelphia and you can rest assured that your stuff will be tracked during the whole move and delivered on time.

+ any other location in Philadelphia, PA

FAQ about moving to Philly from NYC

Here is a list of some of the most frequent and important questions that customers have when moving long distance.

Before you make your final decision on which moving company you will hire for your NYC to Philadelphia move, make sure that you know their answers to these questions.

What is the arrival window when moving to Philadelphia from New York?

Each move has a different arrival window, but once you inquire with us regarding your long distance move we will let you know what the guaranteed arrival window would be in your case. We have 27 tractor trailers which go all over the country. We can help to minimize and coordinate all needed types of deliveries. Please check with your Roadway Moving consultant on available options.

Will my stuff be mixed with other people's stuff?
Depending on whether you choose consolidated or exclusive shipping your stuff might be in the same trailer with other customer’s stuff, but it will never get mixed. We perform a detailed and bar coded inventory of each load. Each time we handle the goods we check the inventory. Chances of missing items are very slim and rare. We also physically separate each job inside our trailers with wood dividers.
Do you provide packing service?
Yes, Roadway Moving provides packing service and it is highly recommended that you hire professional packers when moving long distance in order to make sure that all your items are protected well.
How will you protect my goods during the transportation?

We disassemble , wrap, crate and protect all needed items. Some services are complimentary and some are an additional charge. Our sales representative can explain this in more details.

Will you assemble back my furniture upon delivery and place them where needed?

Yes. Anything our movers took apart at the origin point, we will put back together and place each item exactly where needed. All labeled boxes will be placed in each appropriate room.

Will my price change?
No – we provide guaranteed and set prices which include all aspects of the move process.
Will you provide COI if needed for the delivery management?

Yes. We can provide all needed COI’s for each management.

Do you provide Full Value Protection coverage?
Yes, you can get Full Value Protection coverage for your long distance move through either one of our moving insurance partners or through our in-house FVP option.
What if I need storage for a bit until my place is ready?
We can help with that. We have short and long term storage solutions. We can store the goods for a few days, weeks or even longer.
My destination place requires elevator reservation. Will you be able to work with this?

Yes. We keep in constant communication with you throughout the entire process and in most cases you’ll receive 3-6 days notice prior to your set delivery time.

Do you move plants?

Unfortunately it is prohibited by law to move live plants across state lines.

8 things to know when moving to Philadelphia from New York

Deciding to move to another city can be frightening and overwhelming sometimes, but informing yourself and getting a picture of what it might look like, can help you make that decision easier.

With that in mind, we’ve prepared a list to help you take the first step, bringing Philadelphia closer to you.

The contrast between living expenses in New York and any smaller city can be significant. Since NYC is the most expensive city in the US, moving to Philadelphia will help out your wallet as well. Food and groceries in New York are 13.8% more expensive than in Philadelphia and, overall, New York is 60.6% more expensive than Philly. The best example is comparing the cost of the biggest fast food chain’s McMeal where one costs $10 in NYC and $8 in Philly.

With an average annual salary pay of $72k in Philly doesn’t seem much versus New York’s $83k, but considering living costs differences in numbers, 11k means a lot. The most common companies in this city are Comcast Cable, Inc., Anthropologie, Inc., Temple University, The Boeing Company,… While some of the most popular occupations are Software Engineer, Project Manager, and Operations Manager which pays between $44k and $132k per year.

Median Home Cost is the biggest factor in the cost of living difference, noticing that it is 195% more expensive in New York. That being said, statistics have also shown that housing in New York is 343.9% more expensive than in Philadelphia. These numbers are very high which helps you add more pros to your “Moving to Philly” list.

The City of Brotherly Love was rated as one of the best walking cities in the US. A lot of attractions are grouped so you can even make a tour of some of them in just a few hours on foot. Like all walking cities, Philly also has a great love for bikes, offering thousands of bikes available for rent. You can download their Ride Indego app to do that.

SEPTA – The Southeastern Pennsylvania Transportation Authority has multiple options for transportation including buses, subways, trolleys, trains, and rail routes spread throughout the town. You can choose single-ride tickets or even day, week, or monthly passes on a key card where you can load fares.

Philadelphia has one of the richest historical landmarks in America. Once you decide it’s time to explore, you can check out Rittenhouse Square, Old City (where most historical attractions are located), Washington Square, or the Center City.

The Barnes Foundation is one of the world’s greatest collections of art, so you’ll never get tired of filling your days with some colors. The Betsy Ross House is a must. It is the actual 18th-century house where Betsy Ross lived while she sewed the 1st American flag in 1776, commissioned to her by George Washington.

Cheesesteaks, hoagies, pretzels, crab fries, scrapple, the list goes on. Philadelphia, aka food heaven, is home to several food treasure spots like:
Chickie’s & Pete’s and their signature Crabfries. DINIC’S , a Dutch Eating Place, a diner run by Amish & Mennonite families known for their huge pancakes, apple dumplings, and homemade chicken pot pies. Federal Donuts or FedNuts, a Korean-styled spot famous for its fried chicken, coffee, and unique donut flavors like cookies & cream, carrot cake, and Mississippi mud. The Philly cheesesteak; Philadelphia’s most iconic food!
If you love beer, this city is your dream city. What Philadelphians love more than food is beer. And they have some top-quality breweries to prove that. Philly has been recognized as one of the best beer cities in the US, so rest assured you won’t be disappointed.